How does astrology play out in the ways we relate? Apart from revealing a lot about personalities, astrology can be used as a tool to gain awareness about issues in relating and compatibilities with others, especially in intimate relationships.

Everyone is dominated by a unique mix of the four elements, fire, earth, air and water, which correspond to the psychological archetypes of action, grounding, thinking and feeling. Naturally this mix of elements plays a vital role in the romantic game of attraction as well as in forming and maintaining loving relationships. For example, the elemental position of Venus will show the basic flavor through which love is shared and received. Is affection expressed in a direct and passionate way (fire) or does one need more time to connect with another person (water)? How is that compatible with the position of the Moon in a person’s chart, which says something about their unconscious emotional needs, as well as the position of Mars, which shows how they express their desires, sexuality and willpower?

By learning about the position of Venus, Mars and the Moon in our charts, an astrological analysis can expose the hidden compulsions and urges they create. This brings awareness to the unconscious patterns that determine one’s actions and tendencies when relating. When comparing two charts in a compatibility analysis one can see in which areas the energy between two people flows in a harmonious way and in which areas there are more obstacles and challenges. For example the planet Venus can be in agreeable elements, in which case romantic feelings flow well. How one person expresses love is also how the other person receives it. On the other hand, the planet of communication, Mercury, could be in different elements, causing frequent misunderstandings or arguments on a mental level, or vice versa. There are countless variations and many factors to consider when analyzing the compatibility between two people.

The Love Blueprint workshop will guide participants on how to analyze the positions of celestial objects at their time of birth as a means for understanding themselves and their psychological patterns.  It takes place over three mornings and includes astrological theory as well as questions and answers. 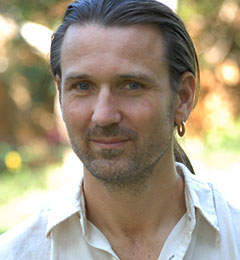 Tarit has studied and practiced Astrology for more than 25 years. He has held seminars and given countless private readings. Over the years, he has come to understand that astrology… Read more about Tarit