A Red Road Consecration for a Way of Life

The Vision Quest is one of the oldest methods used by tribal people on the Red Road as a kind of initiation and spiritual work to search for direction in life. Conditions are set up for Questers to spend four days of solitude in the forest ‘calling for a Vision’ through prayer and fasting. This initiation (which is also a four-year commitment) cultivates maturity and an understanding of responsibility for oneself, one’s society and one’s natural environment.

All of the Questers have fulfilled the role of Supporter for at least one year before making their four-year commitment to quest. Being part of the supporter camp in previous years gives Questers the confidence and openness to receive support from the camp once they begin their own Vision Quest. Together Questers and Supporters create one mystical circle elevating their intentions.

Newcomers are welcome to support for at least one year before taking the four-year commitment to quest. Supporters will safeguard the process from the Vision Quest Camp by watching over Questers (day and night) in service and collective understanding. 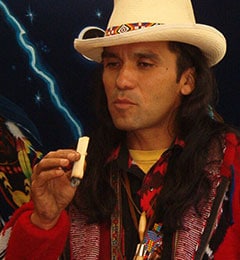 Mao Tanka Hernandez Vidal’s mission is to bridge between the ancient spiritual ways of the indigenous peoples and the modern world. His interest in the wisdom and medicines of the… Read more about Mao